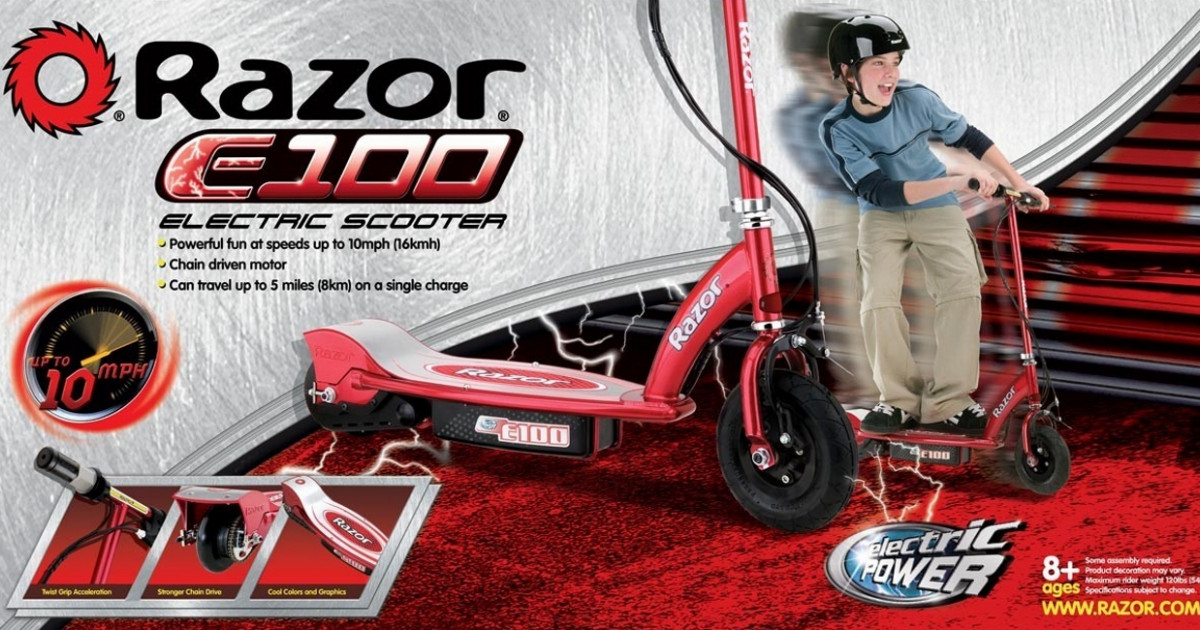 If you are looking for more information about the best electric razor scooter for young adults then my review might just be what you need to read before you make that final purchase decision.

I bought the Razor E100 kids scooter for my daughter’s 10th birthday about two months ago. At first my wife questioned my judgment in buying it for her. The first time she rode it; she lost control and had a minor crash (Whoops!).

However, she was not hurt although we did decide to give her more training on the electric kick scooter to build her confidence before taking it out on her own. 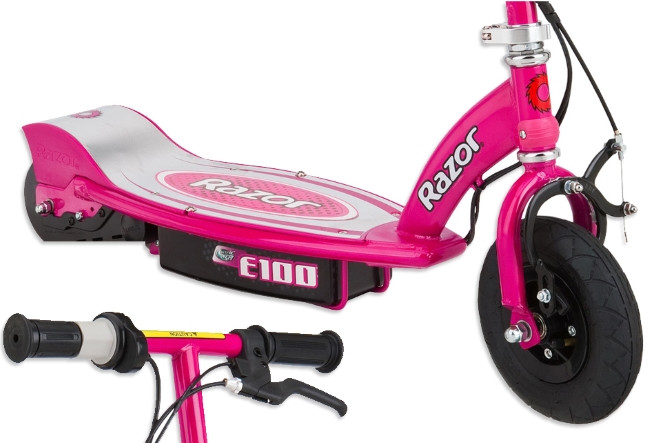 After this extra training, she picked it up again very quickly and we had no more problems at all!

Slowly but surely she became a pro. She loves the gift so much that even today before I sat down to write this review of the Razor E100 she was busy having lots of fun with it outside our house.

What You Get In The Box

Packaged in a neat box the scooter arrived in perfect condition safe for a few bruises on one corner of the box. I suspect that these bruises could have come about during the shipping process.

Nevertheless, the product was well secured inside and I did not see any signs of mishandling or breakage inside.

When I opened the box I first encountered the large foam separators, I suppose these are for protecting the scooter from damage during shipping. They do a great job because the scooter was 95% assembled at the factory and it completely protected inside.

Everything including tires, handle-bars, motor, twist grip throttle, handle-bar stem, charger, limiter, assembly tools etc. was intact. the fact that most of this scooter is assembled obviously makes it easy for us, ht parents and better for the child who doesn;t have to wait so long to get it built!

I put the battery to charge, inflated the tires, and after 20 minutes of assembling the entire system (using the manual that is provided in the box), we were good to go.

However, we had to wait 18 hours for the battery to charge. So i would recommend as soon as the package arrives that you charge the electric scooter battery straight away. Then build the scooter itself the next day. It was a little deflating to think that my child had to wait 18 hours before trying her best new electric scooter, so you can avoid this disappointment by planning ahead!

How to Construct the Razor E100

First you need to attach the handlebars by first opening the quick release, depressing the push button and then closing the lever.

Then you need to inflate the tires although I found the front tire to be already inflated (all the same I took the precaution to inflate it to the recommended PSI).

To charge the battery, I left it plugged into the socket for 18 hours.

The E100's quality is grreat, all of the component pieces are well above average and overall the Razor has a great high quality feel.

The e100 scooter's tires are well-built and capable of operating well even on bumps and rocks. This battery powered scooter is really sturdy and stable and quite heavy as a result, but I see that as a good thing.

The brake is sufficient, as this model is for kids and doesn't go too fast (but of course as you know the effectiveness of the brake depends on the rider’s grip). On a scale of 10 I’d give it an overall quality rating of 8.5.

I found the scooter to work well on most dry surfaces. However, you need to be extra careful when letting your kid play with it when it’s wet as it might slide. I found both tires (especially the rear one) to be quite unstable unlike what you’d expect from a grooved rubber tire. 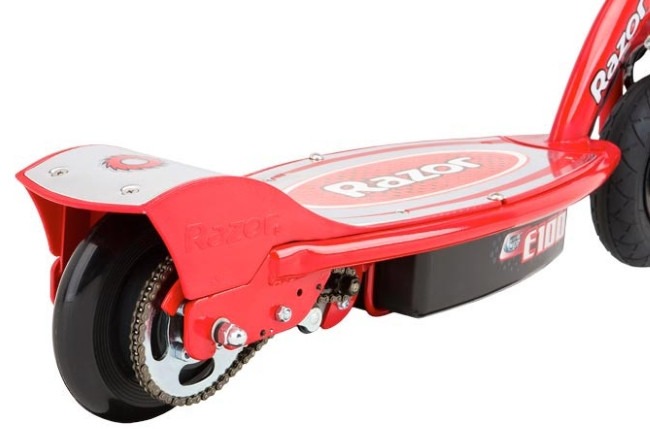 Brakes are intact, but care still needs to be taken while riding on steep slopes.

The 8 inch pneumatic front tire and polyurethane rear wheels make for a smooth ride. The hand-operated brakes use pull technology which allows for effective stopping when you need it. The handlebars are sturdy yet adaptable to riders of all sizes.

So far we have no qualms with the quality of the ride. My daughter was able to master riding it after we had the hiccup when she first got on it. The second time around she got the hang of things almost immediately and has not even had any minor injuries since while having fun with her new gift. 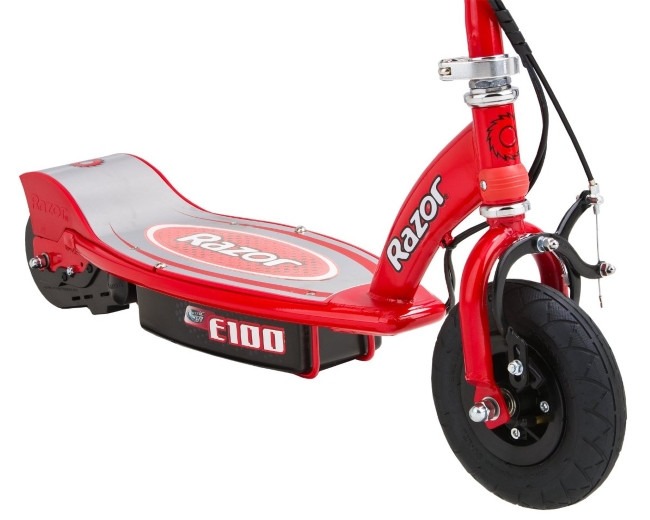 The only tiny problem we’ve experience so far is that the scooter requires an initial push to get moving. It will not go from a standing start, even though you might expect it to. this is by design as it's not a powerful electric scooter, just more of a kids toy one. Usually, one good kick push is all it takes to get the motor going enough to get the childs electric scooter started, so I don’t see it as a major inconvenience.

When it comes to choosing the best electric scooter for kids you expect nothing less than stunning battery performance. The Razor E100 battery lasts a good hour uphill/downhill. According to the manual, the average battery life is 250 charge/discharge cycles.

Although my dughter wanted the Razor E100 in Pink, I shuld mention that it is available in a variety of colors depending on the country you live in. If yo live in the USA, the full range of colors are available:

Now, Razor also do the E90 Electric Scooter which is a smaller version and not so good for up 10 year olds like this one. They also do the E100s which is a seated version (hence the 'S'). And the larger and more powerful version are the Razor E200 model and also Razor E300 which is the most powerful and more sutable for adults. 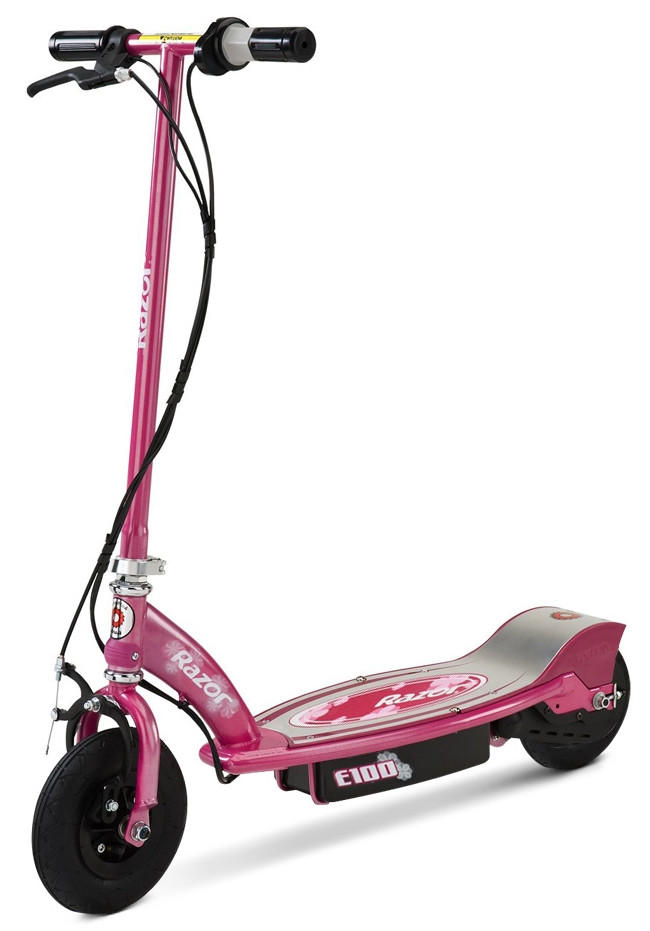 I will try to cover these models in future posts, but the closest variant to this E100 model is the Razor E100 Glow Electric Scooter. This model  has a grip-switch that turns on a strip of blue lights to light up the sidewalk. Very cool for the young boy racers that you know!

I still think it’s too early to give the scooter’s battery a clean bill of health but if the signs so far are anything to go by then the battery is absolutely fine for the job it's intended to do.

This electric razor scooter reviews conclusion is that the Razor E100 offers good value for your money so long as you are familiar with its pros and cons. My daughter tells me that this scooter is the best gift she has ever received! To this end, I’m a proud dad!

The E100 is surprisingly good